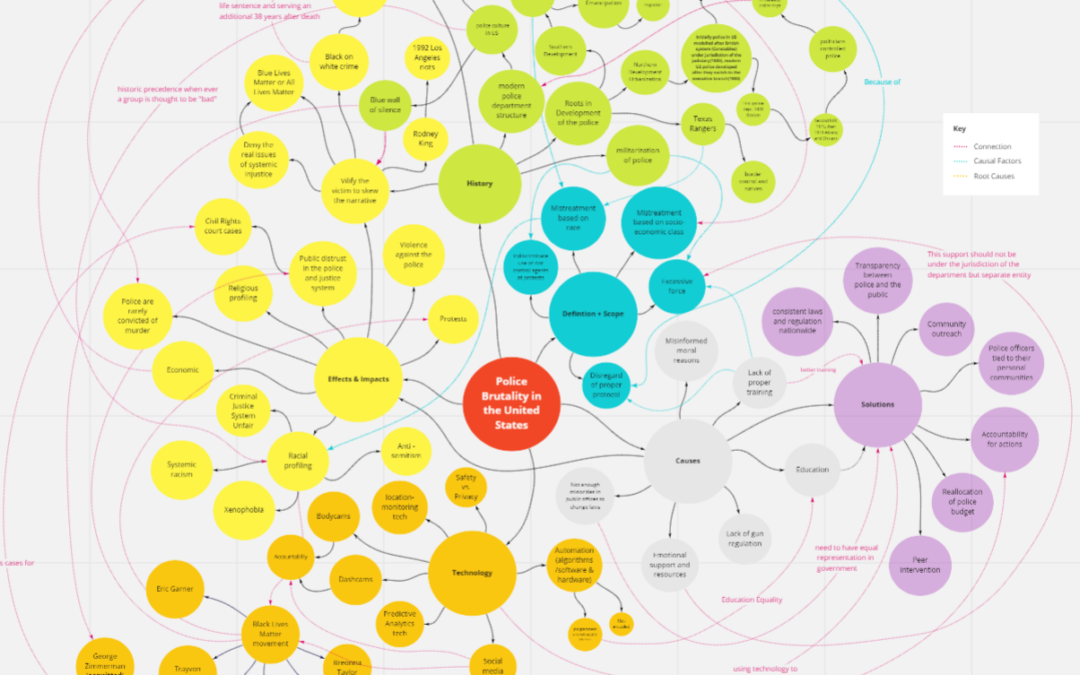 This is the first week of a 5 week collaborative group project.

Goal: Work as a team to explore, investigate, study, analyze, and eventually, ideate and design interventions for, a real world social phenomenon. The project is meant to introduce us to the human-centered design process, leading us through the various stages of how designers conduct research and develop novel and innovative interventions, whether in the form of communications, products, services, or other things, for people.

The Team after a heartfelt discussion decided to investigate the issue of Police Brutality in America.  Our task for this week started by noting down what we thought we knew about the issue in a brief 20 minute mapping session in Tuesday’s class . 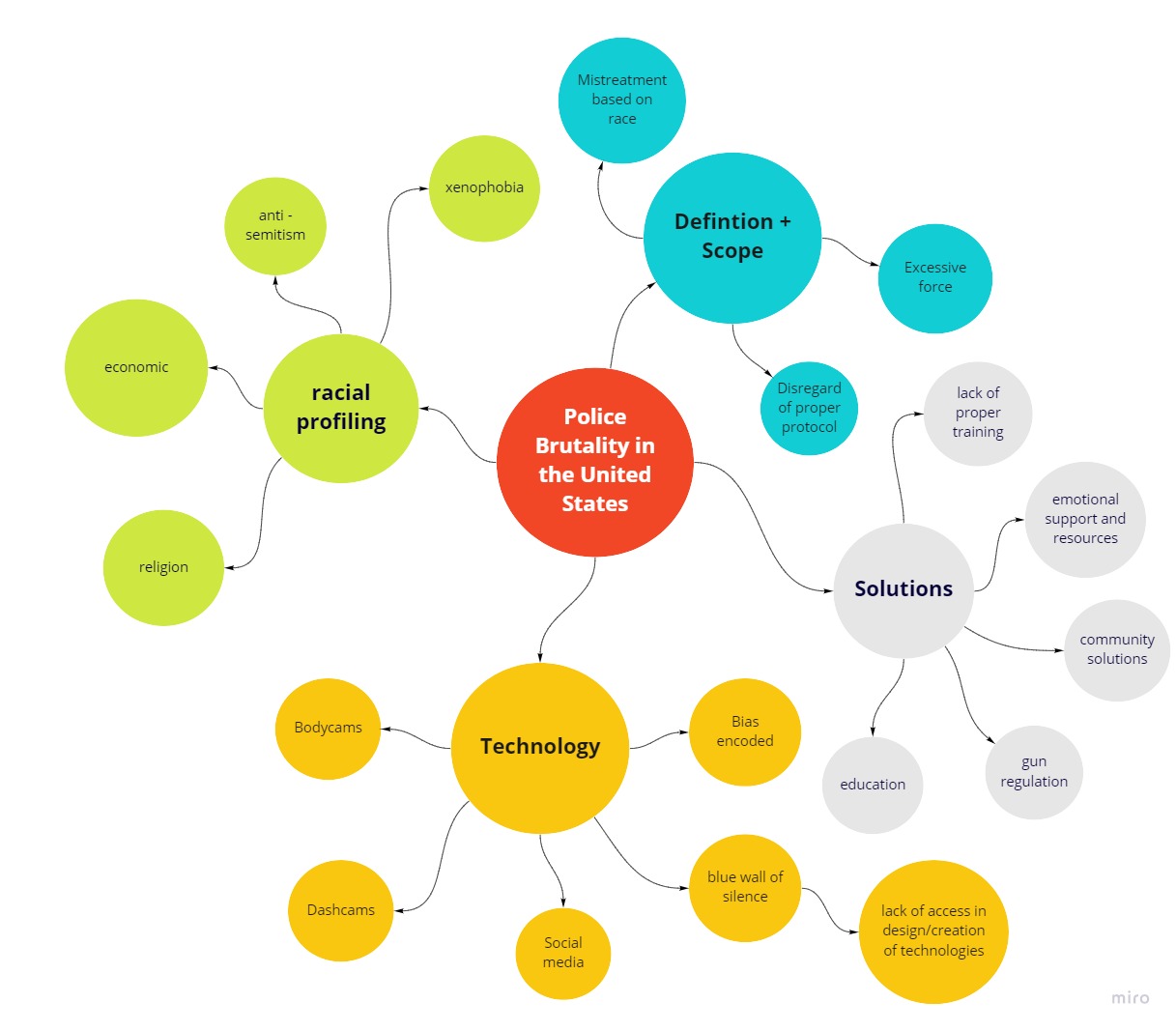 This was the result of our initial mapping without having done any research.  These could be considered our preconceived  ideas on the issue.  Between the end of class,  and our scheduled Saturday  meeting,  we individually did broad secondary research to get a general grasp of the topic and Michelle transferred the map we started in Mural over to Miro.  She also did some tidying up of the map and color coordination. 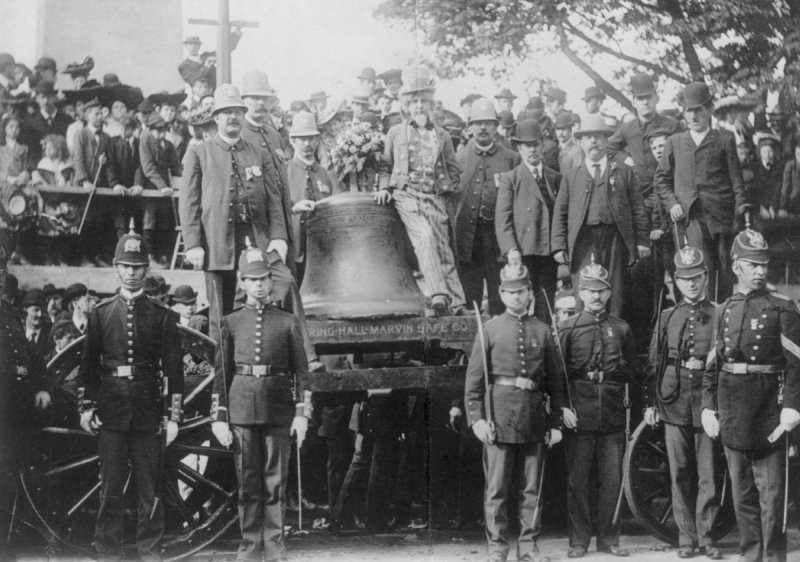 Boston Police watch over the Liberty Bell circa 1903.      Library of Congress / Getty Images

In the time of Covid-19,  I use online research: NYU Library resources online, NYPL online, Google Scholar and a few websites I trusted.

I found NYPL database very frustrating, NYU Library online less frustrating, and Google Scholar the easiest user experience. When looking at Wiki… had to confirm data by going to their secondary sources… It’s a good way to start on a topic if you are not sure of the scope. You can reference their references for validity, and then start digging deeper in databases, and more reliable secondary sources.

Prior to this project, it never occurred to me to look at the history of the US police department. I always imagined it was there. But it’s history is quite complex and revealing.   In the north, the first formal police department was Boston in 1838, followed by New York City in 1845, then Albany and Chicago in 1851.  The development of the police department in the south took a different turn which is why segregation continued to exist in most southern states well into 1960… The relics of the preCivil War Slave Patrol morphed into Black Codes and Jim Crow Laws aimed at subjugating African Americans.

Prior to the development of the formal police department, the US based their policing on the British constable system under jurisdiction of the judiciary branch.  The new system of central policing put the the city police departments under jurisdiction of the executive branch where local politicians started to abuse their influence and power over the police force. It was a city service. It was accountable to the city.  This started to explain a lot.

I knew now why the Boston, New York City and Chicago police departments were used so often in police themed Tv shows (think –  NYPD Blues, Law & Order, Chicago PD, Blue Bloods). And the corruption that surrounded police departments in the early 1900’s from political grafts. It’s the politicians and the people in power that seem to shape our city services.

Here are my MLA formated bibiliographies I used for my research: